A Powerful Speech to the Nation

Michelle Obama, the former First Lady, gave a speech on Monday night as part of the Democratic National Convention, in which she endorsed Democratic candidate, Joe Biden, and delivered a powerful speech on what our country needs. It was so well-done, that people in all parties were complimentary of her.

Touching on Many Important Subjects

In her speech, which was given virtually from her home, indicted President Donald Trump’s first term as president, which has included a terrible response to a pandemic, massive amounts of civil unrest, and increased levels of unemployment. While it has been terrible, Obama warned that it could get much worse:

“So let me be as honest and clear as I possibly can. Donald Trump is the wrong president for our country,” she said. “He has had more than enough time to prove that he can do the job, but he is clearly in over his head. He cannot meet this moment. He simply cannot be who we need him to be for us. It is what it is.”

“If you take one thing from my words tonight, it is this: if you think things cannot possibly get worse, trust me, they can; and they will if we don’t make a change in this election. If we have any hope of ending this chaos, we have got to vote for Joe Biden like our lives depend on it.”

Speaking on the Current State of Our Country

In addition to her criticisms of Trump’s job as president, Michelle Obama also invoked the Black Lives Matter movement and the coronavirus pandemic as reasons why it is paramount we vote Trump out of office:

“More than 150,000 people have died, and our economy is in shambles because of a virus that this president downplayed for too long. It has left millions of people jobless. Too many have lost their health care; too many are struggling to take care of basic necessities like food and rent; too many communities have been left in the lurch to grapple with whether and how to open our schools safely. Internationally, we’ve turned our back, not just on agreements forged by my husband, but on alliances championed by presidents like Reagan and Eisenhower.”

“And here at home, as George Floyd, Breonna Taylor, and a never-ending list of innocent people of color continue to be murdered, stating the simple fact that a Black life matters is still met with derision from the nation’s highest office.”

As of August 18th, there have been more than 170,000 deaths due to the coronavirus, according to John Hopkins University. Nearly 1.2 million Americans filed for unemployment benefits in the week ending on August 1st, which marked the 20th consecutive week with more than a million applicants.

Following the death of George Floyd, civil unrest erupted in not only our country, but across the world, in a movement that Trump criticized heavily, saying that the protestors in Minneapolis were “thugs”. He also said that “when the looting starts, the shooting starts” in a post that was flagged for glorifying violence.”

She Brought Up Her Husband’s Accomplishments

“When my husband left office with Joe Biden at his side, we had a record-breaking stretch of job creation. We’d secured the right to health care for 20,000,000 people. We were respected around the world, rallying our allies to confront climate change. And our leaders had worked hand-in-hand with scientists to help prevent an Ebola outbreak from becoming a global pandemic.” 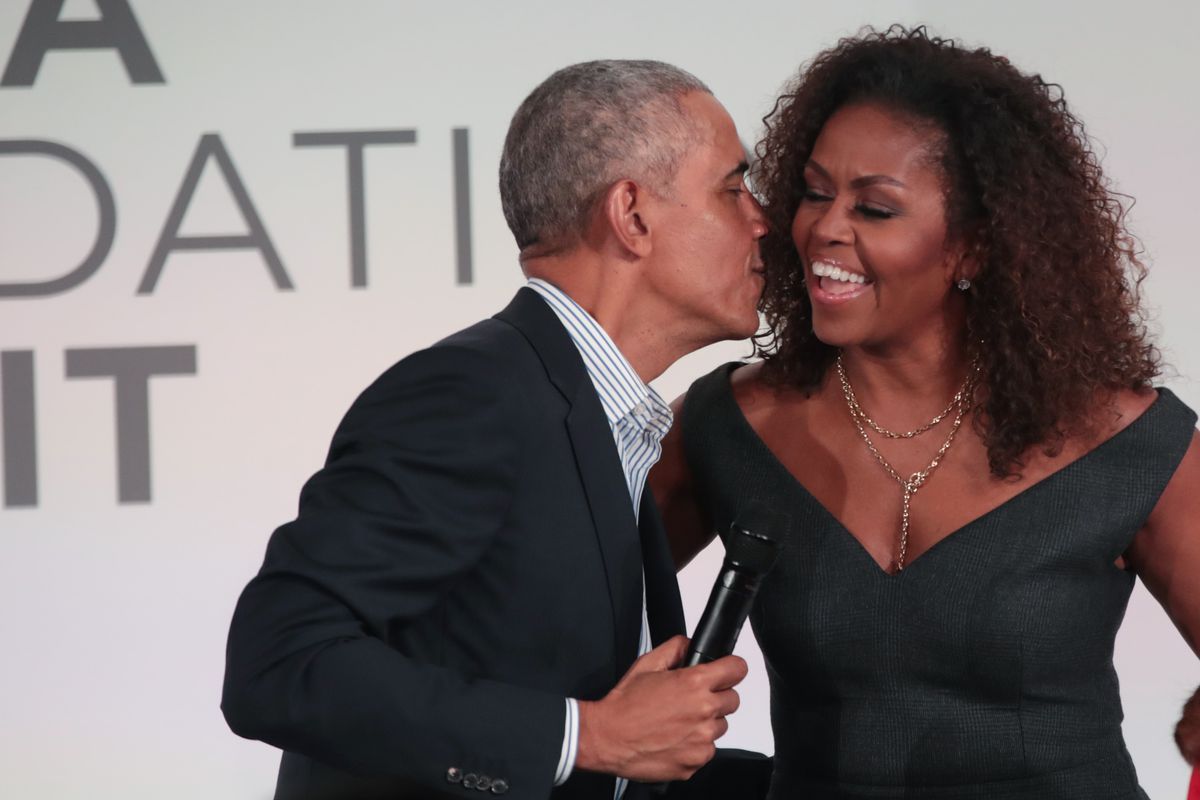 President Obama deployed medical personnel to West Africa to build treatment centers for Ebola. The chief policy advisor to the president’s Council of Advisors on Science and Technology, Bina Venkataraman, has spoken about the contrast between Obama’s response then and Trump’s response now:

“It’s hard to overstate the contrast. For one, you had a president who actually accepted and cultivated scientific advice. So, the fact that I was a policy advisor to a whole council of external scientists, technologists advising the president tells you something about how President Obama even structured getting advice from outsiders, being willing to accept the state of affairs.”

Trump’s response to the coronavirus has been widely criticized, though Republicans still stand firm that he has done an “excellent” job in his response, despite the ever-increasing number of positive cases and deaths.

Of course, being his Twitter-addicted, insecure self, Trump criticized Michell’s Obama’s speech, saying:

“Somebody please explain to @MichelleObama that Donald J. Trump would not be here, in the beautiful White House, if it weren’t for the job done by your husband, Barack Obama.”

“Biden was merely an afterthought, a good reason for that very late & unenthusiastic endorsement.”

“Looking back into history, the response by the ObamaBiden team to the H1N1 Swine Flu was considered a weak and pathetic one. Check out the polling, it’s really bad. The big difference is that they got a free pass from the Corrupt Fake News Media!”

Yep, he blamed the media, again, for this.

Further, the polling he references as being “really bad” is false. About four months into the 2009 epidemic of the swine flu, 67% of the country said they were “very” or “somewhat confident” that the government could handle it. That’s a majority of people feeling satisfied with the government’s response.

We are now almost 6 months into this pandemic and criticism our current government is only growing. But right now, facts don’t matter, we guess.

Praise from Across the Country

Even though our dear, fragile president wasn’t a fan of being called out by Obama, many people seem to have been deeply moved by the speech and what she had to say.

Michelle Obama – That was probably the best political speech that I’ve ever seen.

"Joe knows the anguish of sitting at a table with an empty chair," says Michelle Obama, with a dagger of an emotional image for anyone who has experienced loss.

Michelle Obama’s speech – and especially her delivery – was the kind stuff they’ll teach in classes.

But the biggest takeaway for me was that Joe Biden vs. Trump is a campaign that can bring together Bernie Sanders and John Kasich – and that’s a real big tent.

Michelle Obama right now is setting a very very high bar for every other speaker at this convention.

She’s hitting every argument Democrats want to make but in a personal “I get it, I get you” way.

Michelle Obama had a powerful message and it spoke to the dire situation we are in. If our country is to regain what we have lost over the course of the last few years, we have to stand up, we have to speak out, and we have to vote.

“Going high means standing fierce against hatred while remembering that we are one nation under God. And if we want to survive, we’ve got to find a way to live together and work together across our differences.” Posted by ThomasM - March 7, 2020 0
Rock climbing is a dangerous sport Leto has never been one to shy away from risks, the Morbius star’s luck…

Posted by ThomasM - August 22, 2020 0
The Gang’s All Here! James Gunn has peeled back the curtain on The Suicide Squad with a hilarious panel and… Posted by Shane Black - April 10, 2020 0
The president is seeing a dip in approval over his handling of the pandemic. Posted by ThomasM - December 6, 2019 0
On December 2, 2019, President Donald Trump announced that the US will “restore” steel and aluminum tariffs on Brazil and…