You may or may not have noticed but the NBA made waves yesterday, waves that swept into other sports. Waves that swept throughout our country. It all started with a boycott, a team declining to play a game and it grew into a conversation about even continuing this restarted season and what they would mean for the athletes, for the fans, for the country.

If you haven’t been keeping up with the news, another black man was shot by police officers this week. Jacob Blake was shot seven times in the back as he was leaning into his car. His three children were in the backseat, watching it happen. He was flown to a Milwwaukee hospital where he has been hospitalized since.

It is likely Blake is permanently paralyzed from the shots.

Our country has been in the middle of massive civil rights turmoil with protests, riots, and more erupting after the death of George Floyd a few months ago. Naturally, this new shooting has caused another spark to ignite, and that’s where the NBA comes in.

When talks of the season’s restart in Orlando, Florida first began, many players and figures in the league brought up concern that bringing the season back would distract and take away from the discussions and movements happening around the world. Players wanted to make sure that there was still attention being brought to these problems that mattered to them; they wanted people to know that basketball was just a sport, these tragedies were people’s lives.

Thankfully, the NBA and commissioner, Adam Silver, allowed for the players to wear their jerseys with slogans, phrases, and more that they felt supported the Black Lives Matter movement, should they so choose. They even took the step of having “Black Lives Matter” on display on the courts the games would be played on.

Players knelt before the anthem when it restarted, they decorated their shoes with images and icons, and they talked about the issues during media conferences. Benches sat, watching their teams, wearing BLM shirts. The entire atmosphere was one dedicated to continuing the discussion.

Then Jacob Blake was shot.

This sparked talking, discussions about boycotting games, maybe even leaving the bubble for good. That was all it was: it was talk. Until yesterday.

The Milwaukee Bucks never came out to warm up before their game against the Orlando Magic. Soon, the Magic went back to their own locker room. Then came the news: the Bucks refused to play their game, they were boycotting it in order to protest the shooting and the justice that has yet to dealt to the officer who shot Blake.

It is a moment we won’t soon forget.

Then came reports and conversations that some players wanted to leave, wanted to go back home where they could protest and no longer allow their sport to distract from the stuff that really matters.

A meeting between players was held that night, where they discussed what leaving would do, what continuing to play would do. According to reports, Lebron James was among those who wanted to leave, as was Clippers superstar, Kawhi Leonard. But a majority of the teams wanted to stay, wanted to keep playing.

The meeting was ended without a decision, but conversation picked up again in the morning and it was decided that players wanted to keep playing, though the games scheduled for today were also postponed.

The thing, however, that players have made clear is that they don’t want to play as if things are the same. They want something to change. And they have no qualms in stopping this season, right now, if it doesn’t happen. 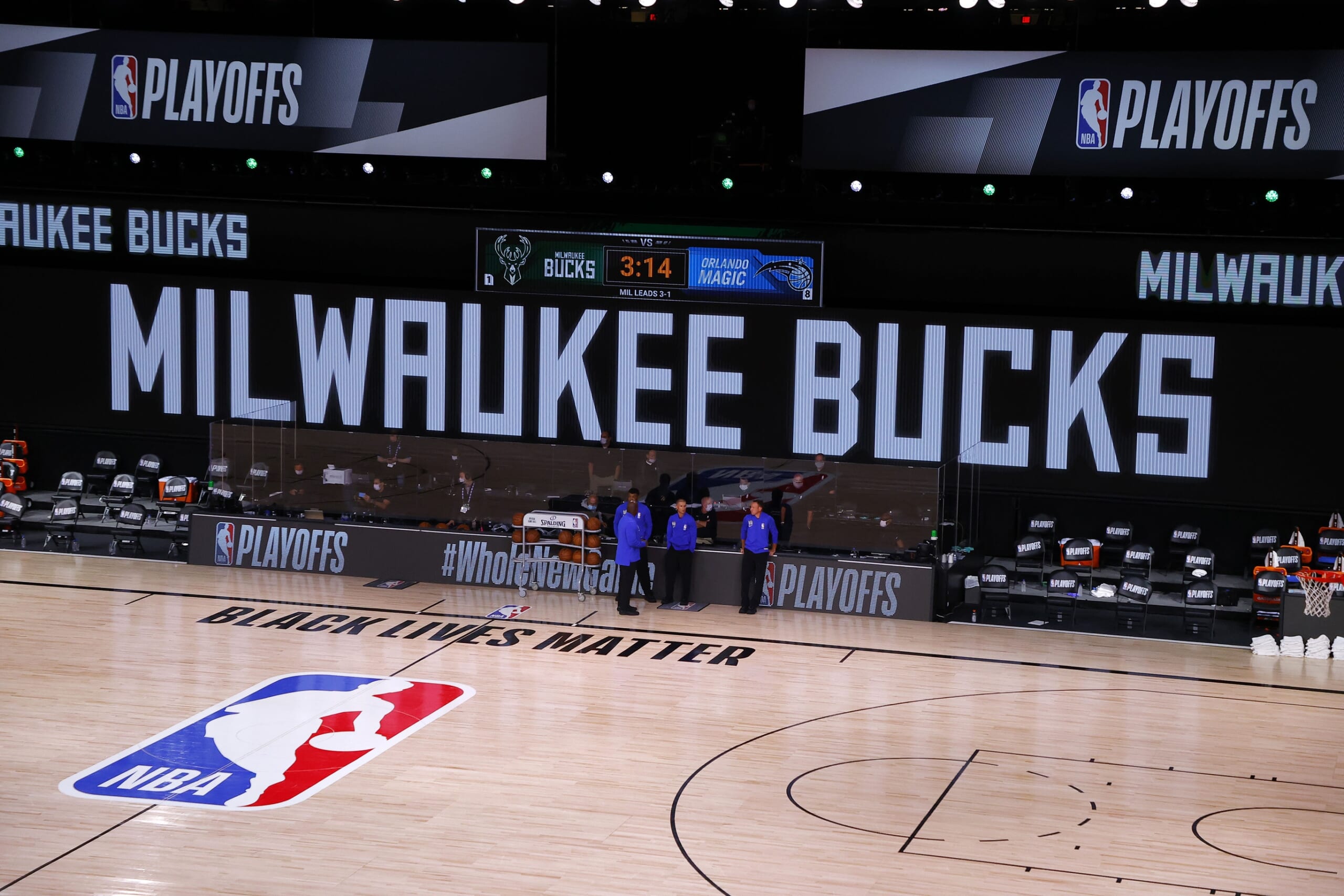 Of course, there are many reactions to this event and many of them are valid. Others are not.

One we saw all too much through it all is: what’s the point? What are they hoping to accomplish by not playing?

Perhaps a valid question, but we want to take the time, right now, to ask you why you are asking that?

Yes, is there a lot of money to be lost for the NBA and players if they were to leave the bubble. Absolutely, and combine that with a year in which teams and organizations have already lost millions due to the pandemic, that is something difficult to overcome.

Yes, sports have provided us a reprieve and joy while we are forced to stay at home, staying away from each other. It’s brought conversations back that have helped connect us all when we can’t connect in-person.

The word “racist” is thrown around a lot right now, and it is not always deservedly so. Sometimes issues can exist between people of differing races without it being a racist issue. But this is not one of those instances.

We have seen this play out far too many times in our history and we have seen the Black community continually be plagued by prejudices and stereotypes that influence how we interact with them. Even for those of us who are fighting alongside them, our entire mindset about them has been swayed in some way. And when Jacob Blake was shot SEVEN times in the back in front of his kids, it was because of a mindset that we have allowed to exist and grow. A way of thinking we have let influence the way we see our Black neighbors.

We no longer see them as people, as Americans.

So imagine these young athletes, who have been locked away in these hotels for weeks now, who grew up being told to be careful about going out, about being pulled over. Imagine living your life working hard at a sport that not only allows you to live a better life, but also gives you a platform from which you can speak. And your own country fails to listen.

You may ask what the point is, but the fact is that asking that question is the point. They have made us stop and pay attention to them. We were all following the situation, watching the news coverage, and eating up every report about it. Within that, were countless conversations about these problems. You may not like it, but the players did exactly what they need to do, and that is powerful.

In the end, we do believe that the NBA players made the right decision to continue playing. It not only will help with the money that has been lost already, but it also continues to give them a platform from which to speak. Not every player in the NBA bubble is a Lebron James or a Kawhi Leonard that can draw national attention with one comment. Most of these players don’t have that audience outside of this bubble. But now, with the entire country watching it, they have a chance to speak.

But we have to do better about how we respond when they say they don’t want to do it anymore. We need to do better at not thinking of them as athletes who are meant to entertain us. We have to be better at understanding that even if it’s their job to play, they have the right to say no.

Most importantly, we have to be better about understanding our questions of “why” are because we selfishly want sports.

The NBA players who have boycotted have not only brought our attention back to Black Lives Matter movement and the horrors that have continued to be played out in our communities, but they have given us a chance to look at ourselves and understand why we won’t listen to them.

For all your BLM news and more, be sure to check back in here with ScoopHash. Posted by Shane Black - July 31, 2020 0
Herman Cain, a former Presidential candidate in the 2012 elections, has passed away after battling the coronavirus over the past… Posted by ThomasM - July 22, 2020 0
Problems and Solutions Some major shakeups to the Ubisoft hierarchy have been occurring these last couple weeks. Now, we’re seeing… Green Cars Are Getting Stronger

Posted by ThomasM - December 1, 2019 0
On November 21, 2019, in Los Angeles near SpaceX’s rocket factory, the new Tesla cyberpunk pickup truck was unveiled. A… Posted by Shane Black - March 31, 2020 0
Bad news for comic fans: not many issues will be available during the month of April.