Tesla has been ranked, for the first time, in the J.D. Power Quality Test that was released today, and well, their rankings leave something to be desired.

The company has come in last in the rankings. The rankings, which are regarded as the industry benchmark for new-vehicle quality, are dependent on problems per 100 vehicle metric. The lower the number you get, the better your ranking is. Dodge came in at number one with a number 136; Tesla sits at the the bottom with 250, meaning 250 problems per 100 vehicles. You cans see this year’s rankings below: 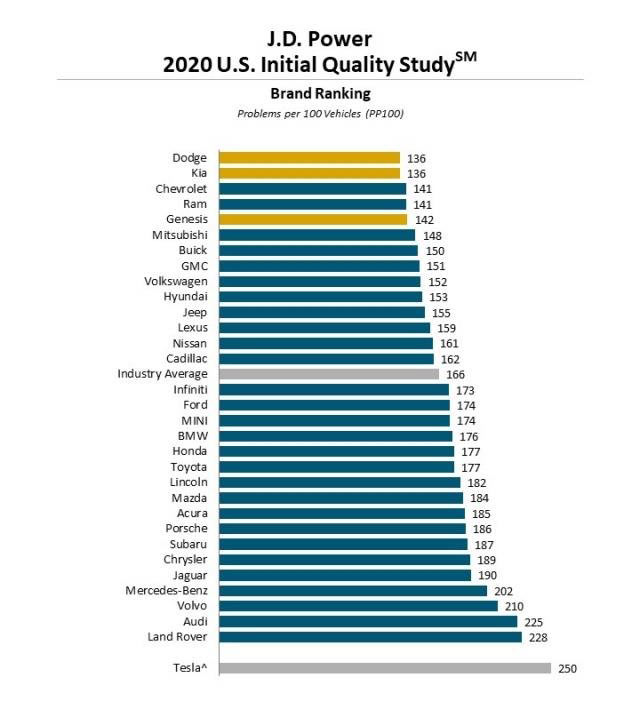 The issues with Tesla’s quality is more about cosmetics, such as paint imperfections, bad-fitting body panels, as well as squeaks and rattles.

The president of the automotive division at J.D. Power, Doug Betts explained this to CNBC:

“These are primarily a result of factory quality. Also, in the area of electric vehicle issues, they do have complaints related to range lower than expected; range gauge is inaccurate.”

“Unlike other manufacturers, Tesla doesn’t grant us permission to survey its owners in 15 states where it is required. However, we were able to collect a large enough sample of surveys from owners in the other 35 states, and, from that base, we calculated Tesla’s score.”

The study, which is held annually, is on its 34th year, focusing on measuring components that fail and features that are hard to use. This year’s quality test is based on responses from 87,282 purchasers and leesees of new 2020 models after 90 days of owning the vehicle.

Separate from this news, the US National Highway Traffic Safety Administration (NHTSA) announced it will be launching an investigation into Tesla’s issues with older MCU, which is the media unit with a large touchscreen.

None of this news is great for Tesla, though it doesn’t seem to have ever slowed the company or the popularity of their cars down. We hope, however, that this low ranking and the investigation being launched against them can show Tesla they have some work to do in improving their vehicles and their quality.